“Prelude and Fugue No. 2 follows many of the traditions created by Bach, but develops them with a 21st century language. Inspired by the writings of Shostakovich, Daniel Farrell develops a Prelude and Fugue pair that share a common motivic idea. The Prelude features harmonic ambiguity and introduces several ideas to be found within the Fugue. The Fugue is a four voice, double fugue infused with chromatic saturation and a tonal language at home within the 21st century. The slower middle section introduces the second fugue subject, while the first fugue subject, in retrograde, becomes the new countersubject. The two subjects are featured in stretto at the end of the piece in a dramatic finish.”

"A simple and pretty piece, Piano Fantasy is designed for young players to explore counterpoint and songlike melodies"


"Inspired by Beethoven's various variation works for the piano, Dance Suite Variations takes those very same techniques but applies them, instead, to the Trumpet. Structured like a baroque-era dance suite, but featuring many contemporary dance styles from both American and Latin cultures, Dance Suite Variations is a stylistically new piece that reflects the rich history of music from around the globe. Perfect to expand trumpet range and stylistic awareness"

"An ironic satire of contemporary music, Rebel is an appreciation of the sensibilities of older music. Perfect for an advanced developing collegiate ensemble"

"This piece explores The Divine Comedy’s Dante’s epic journey from Earth to Heaven. The Prelude follows the old tradition of praising the Muses (Ancient Greek Gods of Music and Art) before telling a story. It introduces themes for the Muses, Beatrice, and Dante. The Prelude ends with introducing the Trumpet solo Stars theme. Inferno develops the characters’ themes and introduces Virgil’s theme (Dante’s guide). Purgatorio opens with a sad farewell to Virgil. Dante’s and Beatrice’s themes meet and combine as they are lovers and she guides him. Paradiso opens with the return of the Stars theme now fully developed as Dante explores the planets and heavens. Beatrice leaves Dante, and St. Bernard replaces her as his guide (musically represented by the hymn tune: St. Ag­nes). Dante’s theme returns in the Trumpets as it heroically leads into a dramatic Grand Pause meant to evoke the infiniteness of God. The final bars are a tradition plagal cadence as Dante accepts God and enters Heaven. A challenging selection for any brass ensemble"

“Puppet Show explores the concept of assigning character roles to performers with, in this case, each Clarinetist becoming the Puppet or the Puppeteer. This three movement piece, follows the story of a Puppet craving to be free from its master. The first movement, showcases a comedic and rebellious entrance by the Puppet. But, the Puppeteer swiftly commands authority and demonstrates that they are the one in charge. The second movement explores the Puppet’s longing to be free and real. The final movement is adventurous and exciting, as the Puppet breaks free from its strings and becomes free at last.”

Composed for the 2019 "Iron Composer Competition" in Cortona, Italy.

“Alone Divided is an exciting duet for two mixed-percussion set-ups. Using identical instrumental set-ups and a mixture of solo, contrapuntal, and unison playing, this piece explores what it means to be alone and what it means to be divided. The audience hears music meant to evoke aggression, but also peace – as being alone and divided is not always an idea derived from aggression. The piece contains two central musical ideas, an 11 beat rhythmic pattern and a melodic theme (first introduced in the vibraphone). Both of these ideas are developed and transposed across multiple instruments (both pitched and unpitched), all evoking various concepts of being alone and divided.

Commissioned for the 2019 "Cortona Sessions for New Music" in Cortona, Italy 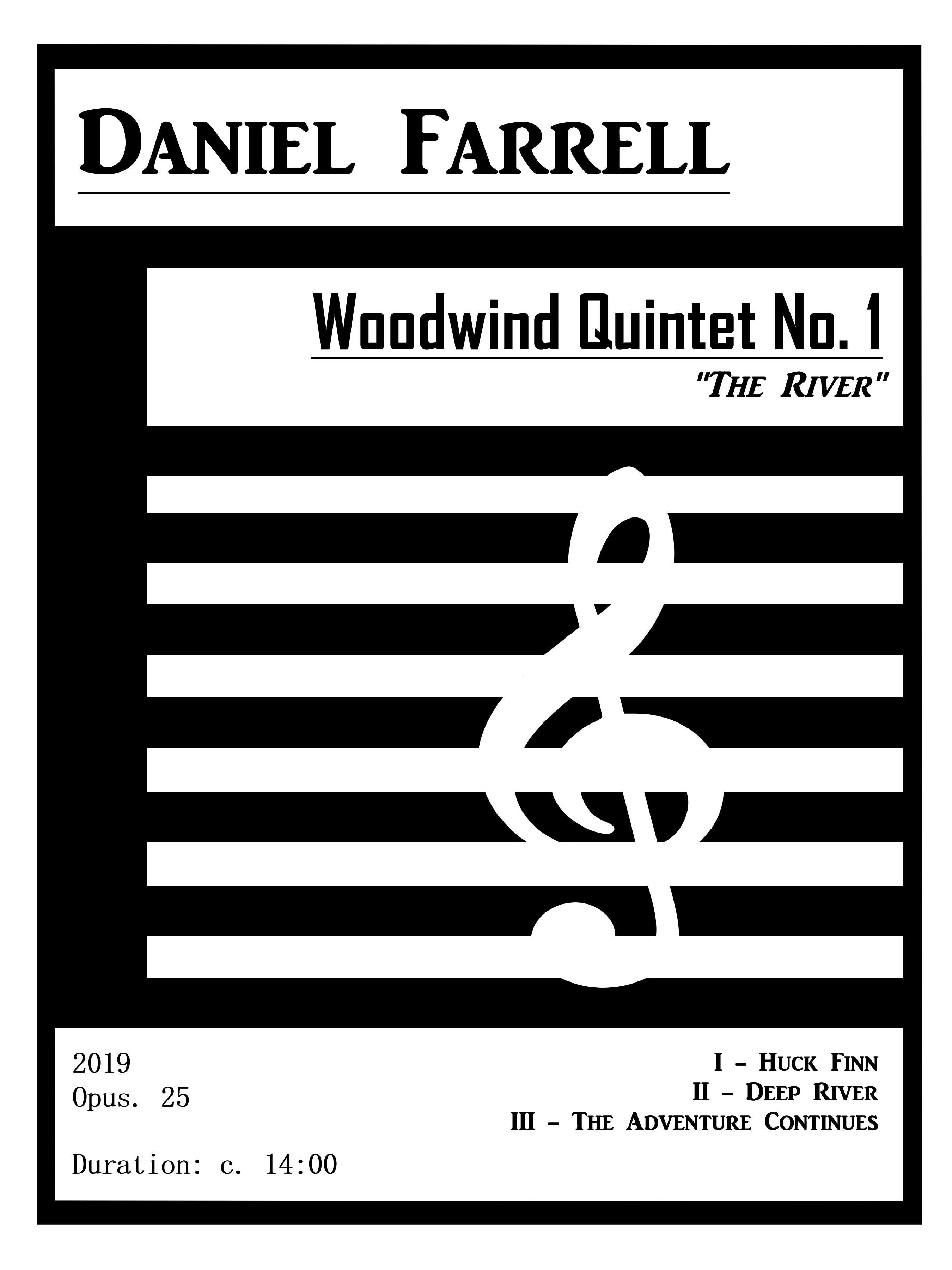 “The River explores a musical setting of Mark Twain’s famed novel “The Adventures of Huckleberry Finn”. The piece is divided into three movements. The first movement - Huck Finn - paints the young protagonist of Huck Finn. Rustic scales and folk elements are used to place the listener in the early 19th century Mississippi region. The fun and bombastic theme highlights Huck’s youth and rebellious nature. This movement also symbolizes the concept of a river and the reflection one sees in its waters – as the movement’s form is palindromic with a “reflection” point occurring halfway through. The second movement – Deep River – paints the character of Jim, a runaway slave whom Huck befriends. Musically, the second movement is an arrangement of the traditional African American spiritual of the same name. The final movement – The Adventure Continues – combines both musical material from the two movements with an undercurrent of excitement as Huck and Jim set out on their quest. A small detour halfway through the piece, with a quirky bassoon solo, reflects the strange diversion in the novel with Tom Sawyer – who makes up a convoluted scenario to save Jim (despite it being a simple task). The novel ends with Huck going off into the sunset – unable to live a simple life, and the quintet ends with a similar sense of excitement and hopefulness.”

“Elemental Variations explores the classical elements in a unique musical setting. The Elemental Theme, first heard in the clarinet, is developed through various musical techniques as part of a theme and variations. Each variation represents, through both the theme’s changes and the ensemble color, a different classical element. Each element variation is assigned a name: Flow of Water, Dance of Earth, Serenity of Air, and March of Fire.

"Waves is an evocative and dramatic work for Orchestra that highlights many of the colors of the ensemble. The tune, first featured in the Viola solo and then developed further along, was written in the sand at Jacksonville Beach by the composer, Daniel Farrell. Upon writing the theme, he hastily wrote that evening an early sketch of what would become Waves.

Waves is inspired musically by the minimalist movement of the 20th century. In keeping with Daniel Farrell’s signature “Neo-Romantic” style however, it is infused with the lush melodies he is known for creating. The piece features the use of an Ocean Drum, a unique percussion instrument meant to directly portray the motion of the waves. The overall structure of the work also parallels the motion of waves on a beach: gradually becoming larger and building upon itself until it reaches a heightened climax in which the wave crashes on the shore. It then recedes (as illustrated in the Flute and Viola solos) into nothingness again.

This is perfect for youth orchestras and developing high-school and early college ensembles.﻿"

The opening Prelude creates an ethereal and primitive setting meant to depict the universe prior to the explosion of existence. The second movement, The Gift of Life, explores the beauty and magnificence of life and the ability to love. It is followed by the harsh and ferocious third movement, The Curse of Death and Lament for its Victims. As death eventually takes all things, it was appropriate to follow it with a musical exploration of the material of the second movement in a more mournful approach. The third movement was initially supposed to be dedicated to the victims of the Las Vegas Shooting Massacre that occurred during the writing of the symphony, however because another shooting (the Texas Church Shooting) sadly occurred so recently after (and still before the completion of the work) the third movement is instead dedicated to the 13,975 victims of gun violence in the United States from the beginning of 2017 to the completion of this work. The last movement, Let There be Light (the English translation of “Fiat Lux”) evokes the brilliance and overall majesty of the universe, as both its light and darkness are part of an ever-greater shifting of time. The movements are played without pauses in between to create an unbroken emotional journey for the listeners.